The OnePlus 6T is OnePlus’s latest offering on its flagship phone. The new device comes with a ton of new features, more power, great camera, and a notched (bezel-less) design. So, you want to rundown on the OnePlus 6T, right? We’ve got all the details for you right here. The OnePlus 6T comes in two colors — midnight black and mirror black — but it’s also worth mentioning that there may be a special edition that will be released in the future. Taking a look at legitimate-looking promotional photos that were leaked, it shows the OnePlus 6T in a thunder purple color option. It definitely looks very striking and intriguing, making it more appealing than the other black versions. Only time will tell when this version is released.

We don’t have any official information regarding the thunder purple, so it’s not certain if it’s real or a clever fake for hype around the device. Much like the OnePlus 6, the OnePlus 6T has a notch display, but it’s not the same notch style at the OnePlus 6. OnePlus decided to go with a dewdrop-style notch. You’ll notice that it’s similar to the Huawei Mate 20’s notch style.
The notch contains a three-in-one ambient/distance/RGB sensor, and a 16-megapixel front-facing lens with an f/2.0 aperture. If you really dislike the notch, you can hide it through some software tweaks, don’t worry.
Speaking in terms of the OnePlus 6T’s bezel, you’ll be happy to know that they’re extremely thin, offering an 86 percent screen-to-body ratio. The panel is an AMOLED one for those deeply attractive blacks and vibrant colors. In addition, OnePlus has added a monochrome Reading Mode, and a blue light-cutting Night Mode.
Turning our attention to the back panel, you’ll notice there’s no longer a fingerprint scanner stuffed under the camera lenses, and hasn’t returned the bottom of the front bezel. OnePlus instead opted to incorporate the fingerprint sensor in-display. Yes, you read that right. All you have to do is press your finger against the fingerprint icon on the screen, and your phone will immediately unlock. If you hold down on the same spot again, you will be able to launch apps from a customizable app shortcuts menu.
One last thing to note here is that the OnePlus 6T does not come with a headphone jack, and will instead ship with a USB-C to 3.5mm adapter in the box. OnePlus has decided to move into the direction of some other companies, such as Apple. 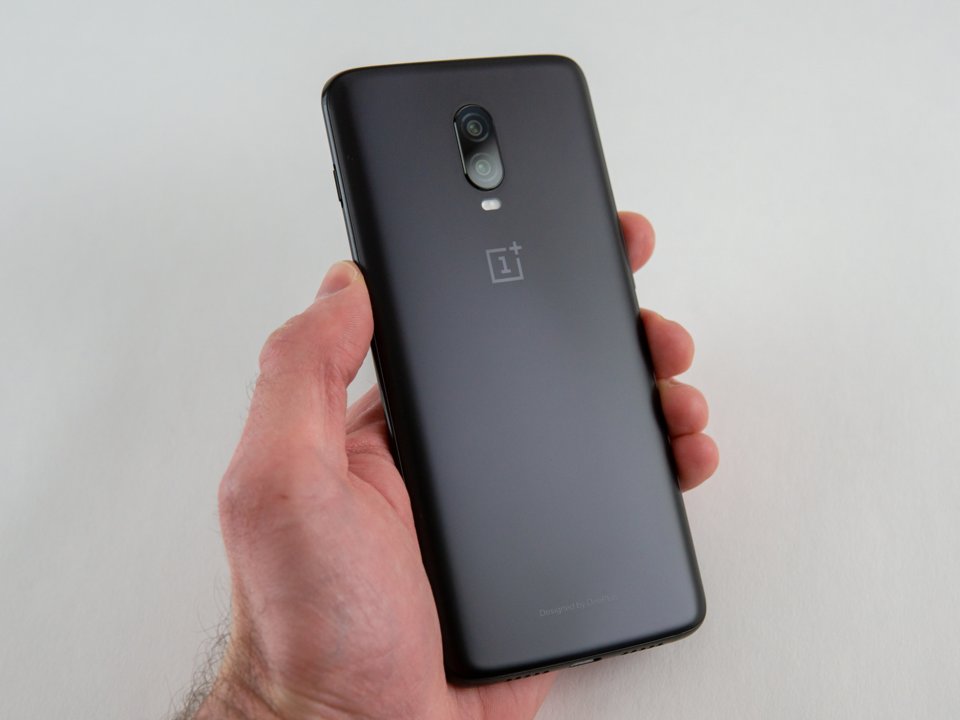 OnePlus is known to cram the latest tech into a lower-cost package, and the OnePlus 6T is continuing this trend. Unfortunately, there is no upgraded processor in there, but there are some noteworthy specs that received a boost in the latest flagship device.

The OnePlus 6T comes with the Snapdragon 845, which shouldn’t be surprising because this chip has been features in many other flagship devices. The power and performance provided by the chip makes its way into the OnePlus 6T.
OnePlus brings two options in the 6T: base model with 6GB RAM and 128GB of onboard storage, and a 8GB RAM version with 256GB of onboard storage. Unfortunately, there’s no option to expand the storage via MicroSD card.
The OnePlus 6T battery has received a boost to a respectable 3,700mAh. This is up from the OnePlus 6’s 3,300mAh battery size. While the 6 didn’t really have any battery longevity issues, it’s nice to have a larger battery. The OnePlus 6T comes paired with OxygenOS that sits on top of Android. On top of that, you’ll be happy to hear that it runs on Android 9.0 Pie. Several other phone manufacturers haven’t upgraded their latest flagships to the latest Android yet, so it’s nice to see OnePlus go that extra mile to deliver the latest Android software.With OxygenOS, you’ll get Android Pie’s new gesture navigation, and even better, it was OnePlus’s own spin on it. Users are able to draw a pause signal on their lock screen to pause music, or even draw specific letters to launch certain apps. These gestures definitely come in really handy to better interact with your device.
With the new Smart Boost mode, your OnePlus 6T device will be even more responsive. This feature stores data from commonly used apps in your phone‘s RAM, allow you to see boost speeds in app launches by around 5 to 20 percent. OnePlus says that this is especially useful in apps that require large amounts of input and output, such as games.
Those of you interested in gaming on the OnePlus 6T, there’s some good news. OnePlus has brought an improved gaming mode that reduce notifications, locks the screen brightness, and increases data prioritization for gaming performance. While in this mode, you will receive notifications from messaging apps as well as calls in small floating bubbles to make sure that you’re up-to-date, but at the same time not impacting your gaming performance and experience. While phones like the LG V40 ThinQ and Huawei P20 Pro are moving in the direction of triple lens systems, the OnePlus 6T has decided to stay with two lenses. This, however, does not mean that the 6T lacks in anything. The 16-megapixel main lens comes with optical image stabilization and a f/1.7 aperture. The main lens is backed by a secondary 20-megapixel lens that comes with a f/1.7 aperture.

While both lenses are impressive, there’s something even better. The 6T comes with an A.I.-driven image recognition system, which will be able to recognize scenes and automatically adjust settings to fit whatever is found in the viewfinder. These adjustments are applied to the 6T’s portrait mode, and the device’s low-light performance will be boosted as well. Nightscape is a new way of recognizing when a night shot is being taken, which is standard on the 6T, and will be coming to the OnePlus 6 in the near future.

Taking pictures is nice, but what about the video? Well, video performance on the OnePlus 6T is really nice too. You’ll be able to capture 4K video at 60 frames per second, a 240-FPS slow motion available at 1080p, and a 480-fps super slow motion that’s available to capture at 720p resolution.

If you’ve made it this far, it’s likely that you’re interested in the OnePlus 6T. If that’s the case, you can pick up the device for $549.

The company is teaming up with T-Mobile, so if you’re thinking of switching to T-Mobile or are on T-Mobile, you can pick up the device through the carrier. This is the first time OnePlus has teamed up with a U.S. carrier to offer the device this way.
CategoriesMobile Mobile (joltEDU) Reviews (joltEDU)
Tags
6TAndroidAndroidPieMobilePhoneMobilePhonesOnePlusOnePlus6OnePlus6TOnePlus6TReviewOnePlusReviewPhoneReviewReviewSmartphonesoftwareTechTechnology